Last Thursday, it was such a nice, truly beautiful day, when I took good old Sammy out for a walk, we very much extended our stroll to include walking on some roads that weren't all level, as is the road in front of my house that we normally walk most every day.

All winter, on our walks, I have kept to just the one street -this street -going as far up as our Cluster Mail Boxes and returning home -a walk that doesn't involve any climbing of any hills -and hills are one thing that are in abundance around these parts!

But last week, we walked and walked and I took pictures -and more pictures -that show some of the ways my home town has changed over the past 6 decades.

We made a loop around the village and when we came down the big hill on the backside of town, at the foot of that hill, we took a dirt road to the left and walked probably a mile (at least) on that road, climbing up the steep incline to the top of the hill in the vicinity referred to here as "Cooper Two."

Cooper is the name of the township here so often there are references about the town and other villages that include that in the name -street, area, whatever. But the section we visited last week -"Cooper Two" comes from the Township and the "Two" has to do with the mines in the vicinity.

From the start of our walk along that dirt road, I kept trying to look past the trees for familiar landmarks along the way and for one specific thing that was the hallmark of this part of our region.

The Boney Pile! (When I was a kid it had several other names besides the boney pile. Some referred to it as the Tipple, others as the Slate Dump or the Slag Pile. My children's generation I have since learned called it the "Volcano.")

Back in the 50s, my older aunt's husband used to love to go up behind the Boney Pile and wander around amidst the rubble of the long-ago, abandoned then at least 20 years, coal mining history. He would point to various items and then try to explain to me what place this or that piece had in connection with the mining of the coal that had once been the lifeblood of this little village as well as most every other little town dotted across the county.

And one of the things he and I would usually do on these visits was to climb up to the top of the Boney Pile and from there, we could see all across the valley, such as it is, where my home village is located. From our vantage point, to our left, we could see down into the ghost town of Peale and beyond that, we could see the forest as it grew along the hillside going up to the old train station in Peale, to the coal strippings that were running hot and heavy 50 plus years ago in the region referred to here as "Tunnelside" and beyond that, to another tiny stop on the old railroad line -Gorton.

I kept looking and looking for a glimpse of the Boney Pile but couldn't find it! I couldn't even find the old path that as kids, my friends and I often walked back to the base of the boney pile too.

Now that Boney Pile or Tipple -or as my kids refer to it -"The Volcano" was something that my Grandmother as well as my Mom too, both hated! To them, it was just a huge, huge pile of slag, cinders, rocks and such -the useless stuff of the coal mining industry. And it was reputed too that back when I was a kid, the Boney Pile was still smoldering away, deep in the center which thus would give my kids and their pals the idea I suppose to call this thing "The Volcano." My Grandmother always worried about the aspect that the boney pile was still on fire and that one of these days, as she would say to my uncle and to me, "Someone's gonna climb to the top of that big, ugly and smelly thing and it's going to erupt and swallow those people up, alive!"

Hearing her say that did put a teensy bit of fear into me but not quite enough to stop me from exploring down there with my uncle.

But last week, as we walked and I took snapshot after snapshot along the road, I was disappointed in that I couldn't find, couldn't see the Boney Pile. 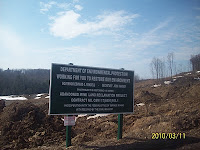 And on both sides of the dirt road, along the mountainside, we saw these sights then too. 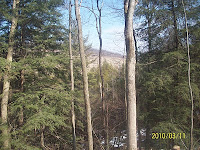 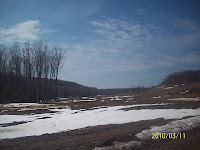 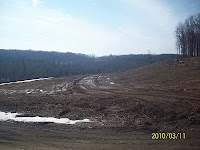 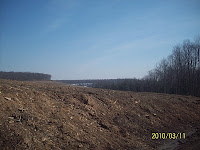 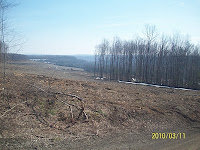 The last photo there is looking out and over the approximate area where that Boney Pile I knew throughout my childhood used to be as it is gone now, plowed over in the reclamation of the area through a very large, ongoing job to reclaim the land to its former glory.

However, it struck me as also being something -dare I say it -very sad too as I lost a large part of my history in the covering over of the Boney Pile, "The Volcano."

Now if my Grandma were alive and were to hear me voice something like that last sentence, she would probably tell me -or you -that I must have lost all my marbles or some such. She so hated that part of the topography of this little town I'm sure she would regard it as being akin to hemorrhoids treatments of the highest magnitude!

While I can understand her opinion that this was just a huge, dirty old eyesore, it also was a part of my childhood, my youthful years and the fun of the excursions up there with my uncle are vivid parts of my memories.

And now, that big landmark is also a part of my memories too, isn't it?

Back in 1970, when the company I worked for sent me out to work in Phoenix, AZ for the month of July and again, for the month of October that year, we were working outside of Phoenix, off the Black Canyon Freeway and I recall my Mom asking me what the landscape was like out there -if there were mountains and if so, were they high, like the Rockies or what?

And the closest thing I could think of to describe the mountains behind the range where we were working was that they reminded me of the old Boney Pile in a very pretty way.

And today, since I can't locate any old photos showing what The Volcano"/Boney Pile actually looked like, you're just gonna have to take my word for it when I say Grandma was wrong.

The Boney Pile really was quite a beautiful place!
Posted by Jeni at 12:44 AM

I rather hate to see how my old hometown has changed over the years and so many memorable spots of my youth are now developed into something completely different. I know that change is good but honestly, do we have to change EVERYTHING??

Its always sad when the things we knew from childhood are not there anymore. Puts me off going back because in my head I can picture things how they were so clearly.
Lovely photos though.
Word ver was REAPER well at least it wasn't the Grim reaper!

Funny how we all had some place in our childhood that sticks with us all these years, but to someone else it may have been nothing at all. You had the boney pile. I had "the weeds" - a couple of empty lots at the end of our alley where all the kids played, climbed trees and built forts...until some builder had the nerve to clean up the property and put houses there.

now that you have written about it, it is saved for those that come latter

leave to the feds to fix things :-)

I always love hearing people reminisce about the places of their past. So sad when they change so drastically.