Gosh, but it's nice today! Beautiful day in Pennsylvania -and probably around a good bit of the country as well. Sunny, bright, warm -snow melting down quickly and a little of the mud is even beginning to dry up too, thanks to no rain, snow and yuckiness over the past few days.

So, in conjunction with my ongoing exercise and diet (that's not been being observed too much of late), Sammy and I went for our fairly regular walk. I even took my camera along to try to take a couple of pictures that I could post here as well -and use them, if need be, to prove to my doctor perhaps that yes, I have been out and at least doing a little bit of walking as my exercise program.

I had a little idea when we left the house of what I wanted to photograph and post here to show you but I got so many pictures by the time I was done that you might think -if I were to post them all today -that maybe I'd been away, enjoying one of those Branson vacation packages or something along those lines at any rate.

My original idea for my post today was to show you a bit of history from this little village, mainly pertaining to the U.S. Postal Service as it was over the years and is today, available to those of us who live here.

So, beginning here with the earliest photo I've come across to date of what once upon a time -probably way, way before my time even -was perhaps the first post office in Grassflat. I think this photo was sent to me by my good friend (and long-distance historian of this region), Jeff Feldmeier, from Allen Park, Michigan. He wasn't sure where this building was located but near as I can figure out, based on the church steeple nearby, I think this was the house that stood beside the old Sts Peter and Paul Catholic Church that was in the upper end, known as "Pleasant Hill" section of the town. (That church burned to the ground either in the fall of 1966 or 1967 -can't find anyone who is 100% sure of which year that happened.) Anyway, neither Jeff nor I have a clue as to what year this photo of the old post office was taken either. I think, the place I knew as the post office while I was a child and until my early teen-age years was located from probably the early 1920s until the late 50s in a building that was added on to the homestead of the Lakin family from town. When I was a kid, the postmistress was Miss Ethel Lakin and her home was at that time, considered to be one of the finer houses in the village. Sadly, after her death, the place suffered greatly and about 18 months ago, was sold for the grand sum of $4,500 -if you can imagine buying a house for a price like that in today's age!

Here's what's left of that house today -which will probably explain why the price was so low too! 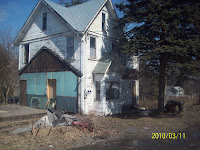 The addition to the house that housed the post office of my younger days was located where you see the triangular outline of something that obviously has been torn away. And thank goodness it was torn off too as the roof was caving in, windows broken and well, just in a big mess of disarray. 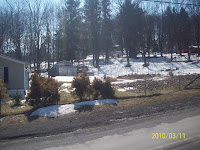 After Ethel Lakin, the long-time postmistress here retired, the guy who took her place as postmaster (Tom Janosky) also moved the post office to a building that had at one time been a little store in town and which Tom owned. That building has since been torn down as has the remains of a big general store that was owned and operated by the Mike Humenik and his son, Johnny, for many years. It was referred to often as the old "Company Store" because before Mike took it over, the building had belonged to, of course, the Coal Company that pretty much ran the town for many, many years. This is what is now on the land that formerly was the post office during the 60s and up until 1994 when our post office was permanently closed and the old general -or Humenik's- store.

And this my friends, is where I get my mail delivered today! 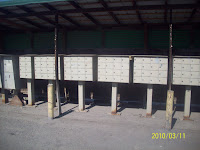 Since the summer of 1994, when Tom retired (our last postmaster), the post office decided not to use the building they rented from Tom as it needed a lot of upgrades to make it handicapped accessible, provide adequate parking and such, and apparently it was felt it would be too difficult and costly to do that, so they shut the post office in town down then.

My great friend, the late "Uncle Joe Benny" Nadzom, (He and his wife are not related to me but my kids and I always refer to them as "Uncle Joe Benny" or "Aunt Helen Ann".) tried and tried to keep the post office from closing on us but it was a useless battle. So today, the residents of town either get their mail delivered directly to their home if they were on the old Rural delivery route system or they have a box in one of the three "cluster" boxes that are strategically located within the village.

This group -where I pick up my mail -is almost dead-center in town, a bit below where the last post office once stood and the buildings that occupied this site when I was a kid were what was left of the Westberg's Garage and the old "nick" -short for Nickolodeon or the movie theater owned by the Isaac Kolivosky family. Yes, this little village at one time, clear up into the very early 50s, had a functioning movie theater here! I even remember going to see two movies there too as a child -"Snow White" and the last movie I think ever shown at the old theater, "Miracle of Fatima."

I took several other photos (several, being a bit of an understatement) but will do a couple other posts using some of those pictures in connection with the them here of the way the scenes in my hometown, this little village, used to be and how they are today.

As to the loss of our post office, this is something I miss very much, not having a building to go into and pick up my mail there. It was the town's focal point for keeping up with the news around the village -true stuff or just plain gossip, ya know. It was where one learned that this person was ailing, another had died, someone else got engaged or married, new babies that were born were celebrated in that old establishment too for many, many years. Today, the only establishments in town where one can sort of "catch up" on local news is either The Moose or the town's remaining pub, Cooper's Bar and Grill. Well, the Catholic folks can still learn a little via their church built atop the hill in town in the 60s but that still leaves the Protestant population kind of out in the cold, ya know.

It was how people related to each other and now, ask anyone who has lived here for a long time and they will tell you -as I often say -about how, way back when, I knew almost everyone in the village and in some instances, knew their family trees almost as well as I knew my own!

How things have changed to today where none of us can say that about our neighbors and the village as a whole any more because in many cases, we have neighbors who aren't exactly new but may as well have just moved in on our respective streets because we no longer know the names of those who are our neighbors.

And that is something I do, truly miss!
Posted by Jeni at 3:51 PM

i remember as a kid walking to the post office and getting my grandparents mail from Tom! i will always call the tavern across the street from Yhe Moose, "Bosaks".. lots of great memories in grassflat :)

That was interesting, Jenny. I've only lived here in the Ozarks 23 years, but we had a tiny post office when I moved here. A few years later our postmistress retired, and they closed it down. Since then, our mail is delivered from town, 10 miles away, and they even had to change our zip code to do that.

The old post office was far more charming that what you've got now. I wish they'd fix up old buildings instead of letting them rot and then tearing them down.

Terri Terri sent me your way about family trees. Do you have any suggestions on getting started? Need to look up family tree info.

I have back to my great grandfather, but I'd like to try and trace back to Ireland.

My aunt and uncle lived next door to their small town post office in Hammond, WI since the time they were married. My uncle is gone, by my aunt still lives in that same house. I was always fascinated by that little post office and that they didn't get mail delivered right to a box on their house, like we had at my house. I grew up in St. Paul, which was a big city, especially in comparison. If it weren't for my relatives in small towns, I'd have no idea how valuable something like a post office could be to people.