Because today I am planning on having a very "lazy" day, I decided perhaps it would be a good idea if I took a little time and posted something here on my blog!

And boy, I'm really glad I did that because I got a big surprise when I opened to my blog!

Not quite like having my Reader back, but now, Blogger has a running listing of posts to some of my favorite bloggers that I have missed not being able to keep up with since they did away with the Reader. Don't know who or what inspired the powers that be to do this but I was very happy to see I can still reconnect with several of my old favorite bloggers once again!

This is going to be just a little bit of a "catch-up" on what I've been doing here for the past two weeks or so -nothing of drastic importance going on, that's for sure, so it may be more than a tad boring.

Mandy and the grandchildren came up for Easter, which made for a very nice weekend that way! Having her here Sunday morning meant there was someone who would wake my lazy butt up in time to get ready and get out the door in time to go to church and that was very nice. The kids were both very well-behaved during the service with one small exception. Midway in the service, Mandy poked me to direct my attention to Kurtis, who was sitting on her left side. I glanced over and there he was, leaning down and in a very active (abeit a stage whisper type) conversation with our next-door neighbor, Gail, who was sitting to his left. Just watching him converse with her and how animated he was, I knew immediately what he was doing, what he was telling her!

He was giving her his standard run down on all the information he could recall that he has acquired now about either Three Mile Island and Chernobyl and the nuclear disasters that took place at those places! It is really amazing to hear an eight-year-old spout off all kinds of data about those incidents although, at times, Mandy says she almost wishes he would return to obsessing about lego blocks or even the Twin Towers to give her a little break from nuclear reactors and disasters, etc.

But one thing for sure -his interest in this topic and the way he can remember so much of what he has been reading about it sure does show us how well he is learning more and more every day, doesn't it?

To keep myself occupied and steer clear of certain potentials that could cause me to get a bit depressed, I've been trying to get myself in gear and return to doing the embroidery work. As a result of that, I have finished a very pretty set of pillow cases -pansies design on them -and was quite pleased with the way they turned out. Because I have one large storage tote that is completely filled to the brim with embroidery kits of various types waiting for me to decide to work on one of them (plus a box I keep by my recliner with about 8-10 other kits there, that I plan to get done sometime this year), I decided to tackle a kit I have had for probably 4-5 years now. This is for a fullsize tablecloth -52 inches by 70 inches which I think will just fit on my dining room table. The design on it consists of a medium-sized rose in bloom surrounded by a couple little violets in each corner, as well as a repeat of the bouquet in the center of the cloth and along each side too. I had hesitated beginning this kit as for whatever reason I had in my mind, it struck me as being rather complicated to work. However, since I have been working on it now and have one corner bouquet completed, it's actually a relatively simple exercise in bits of satin stitches, french knots and the good old stem stitch with only a few places requiring the lazy daisy stitch. Because of the size though, it is going to be a fairly time-consuming project now but at least I'm enjoying watching the piece come to life as I get more and more of the flowers completed on it.

I've been debating today about perhaps mixing up a batch of the Swedish Rye bread and then, provided it turns out nice enough, taking a loaf or two and delivering it to a couple of my friends and Avon customers too. Before Easter, I made a batch of whole wheat bread along with 4 dozen sweet rolls and then too, a batch of the Swedish Rye so that Mandy had some of each type to take home with her. Two of those loaves -one rye and one whole wheat -were for Kurtis to have to take to school with him after Easter break for his class activity as the kids were learning little things about cultures and ethnicity and Mandy thought it would be neat for him to take the homemade bread to class and tell his classmates that this is something that is a part of my ancestral culture -home-baked bread, and the rye bread being from a recipe that my cousins and I believe probably was passed down through the generations from my great-grandmother! Mandy said the kids enjoyed that in Kurt's class so that was good to hear!

And now, as I decide what I'm going to do here today -other than spending the bulk of it working on this tablecloth, I'll close this now with something I haven't posted here in ages!

A picture of Maya and Kurtis in their "Sunday-Go-Meeting" clothes -a little extra special for Easter Sunday, you know. (Maya is going on eleven now and stands almost up to my chin and Kurtis just turned eight on Palm Sunday. He's growing so tall now too -like the proverbial bad weeds, ya know!) 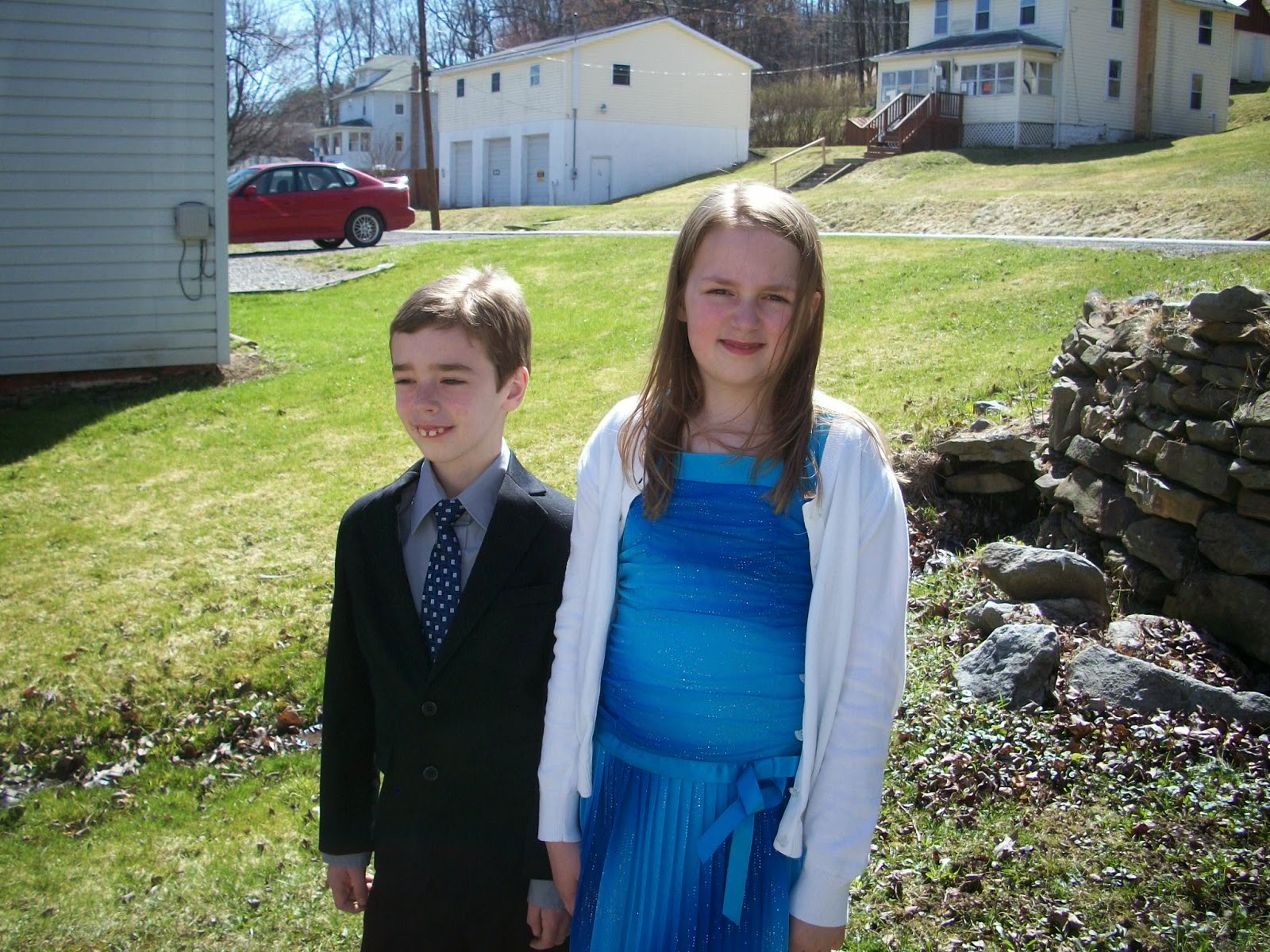 Happy May and may it bring lots of sunshine, warmth and plenty of flowers!
Posted by Jeni at 2:30 PM 2 comments: