More Maya -to about 18 months 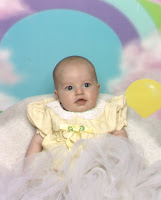 (Maya -at three months (one of my most favorite pictures too!)

From three months to a year, Maya’s growth was very good. She gained weight nicely – not accumulating fat, but rather good gains with muscle tone. In length, her rate of growth was very high and it definitely began to appear that she would be very tall if her height continued at that pace.

She seemed to mark the normal events in good form –smiling about about two months, rolling over, sitting up, then pulling herself to a standing position. The physical things appeared to be fairly well on target.

But as she grew, my older daughter and I began to notice little things that just seemed not quite in place –off a notch or two, ya know.

By the time she was 7-8 months, we noticed she rarely would make eye contact with us and definitely would refuse to try to maintain it if you tried to push that issues.

She wouldn’t reach for us, also never began to give any of the early indicators most babies will show when they want a particular toy, or person or if they want a bottle, even. She never reached for anything, never pointed to anything either.

Talking to her, she often gave the appearance of not hearing us or else, just plain ignoring those around here. In her own little world, as it were.

She did have a couple of stuffed toys that she would occasionally bat around and play with a little bit – a caterpillar that she liked to grab mainly to chew on it though. 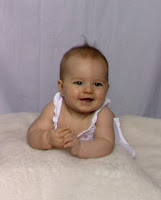 The issue of how she would either ignore us or not hear us had me wondering for a while if perhaps she might have a hearing problem. However, I determined on my own one day that her hearing was actually quite good.

She had discovered the tv set fairly early on and once she was able to stand, she would watch it constantly. One night, she was in her playpen and the tv was turned off. Standing a little behind her I turned the tv set on by using the remote and when I hit the on switch, it made a little tiny, barely audible clicking sound. At the time, Maya was sitting in her playpen but she heard that tiny click noise and before the picture and audio came through on the tv, she was standing up and staring directly at the tv screen – waiting for whatever program was playing at that time to begin.

To my way of thinking, that was a darned good piece of proof that there was nothing wrong with her hearing.

But, if she could hear ok, why then was she not doing other things that we consider to be normal parts of a babies’ growth?

Carrie, my older daughter and I cautiously mentioned to Mandy about Maya’s lack of eye contact. We didn’t want to alarm her any more than was absolutely necessary but still, we wanted to let her know as gently as possible that this wasn’t normal development.

Then, Maya started trying to walk and finally, when she was thirteen months, she began taking her first tentative steps. 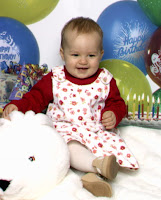 As she picked up on balance she seemed automatically to accrue speed too. Turned out she was not going to be a “walker” but rather a “runner.” And with that came another thing that some times is associated with autism – toe walking. However, because Mandy had been a toe walker and my ex-husband’s mother was also a toe walker – still is to this day and she’s 81 or 82 years old now –I really didn’t get too hyper about the “toe walking” thing.

She did begin somewhere along that time though to begin hand flapping –frequently and a lot of it too. Ok, you can kind of rationalize that too that lots of children, adults as well, when excited, do a bit of that. 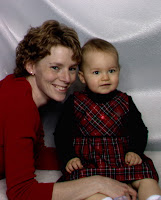 When you stop to think about any of the things that are so-called markers for autism though, you can rationalize almost anything then I suppose. And, if you aren’t aware at all –as many parents are in that circumstance too – it’s really easy to miss some of these events – or non-events –as not being very important.

After she started walking though, each time we would take her in for a routine checkup and of course, sometimes this involved vaccines, I would mention some of these aspects to the pediatrician. She asked us if she was talking and I said no but Mandy insisted some of her babbling was meant to be interpreted as “da da” but the only sounds she made were the “D” and “B” sounds –no “M” sounds at all. Then one day when she was about 15-16 months old, that entire day, she kept making the “M” sound. Did that the entire day and did not insert any other babbling sounds though. But, until she actually started to talk when she was about 28 months old, that was the one and only time we heard the “M” sound from her.

Don't forget to check out THIS BLOG too as "SnoopMurph" Linda talks about various autism topics, mostly as they pertain to her little boy, Connor, too.

I can see where all of those milestones, or lack of milestones in some cases would begin to cause concern. I can also see why one might second guess themselves in thinking anything might be a little off the mark. Autism sure doesn't give you a definitive roadmap, does it?

All the milestones keep building on each other.. one day we'll all be made perfect.

Maya certainly did have indicators of autism, but when children are so young, it is easy to overlook them. I will be telling more about Brandon's autism on my post tonight. It is my goal to educate the general public about autism and the disorders on the autism spectrum. The best way I can do this is to tell of our experiences with Brandon and add pertinent information.

Thank you for telling us about Maya.

This is such a good description of the process of discovery that I'm sure it will help many who read it. The pictures are beautiful - she's such a beautiful little girl.

All those little signs. It must be so difficult to wonder whether you are over-reacting, or whether there is genuine cause for concern.