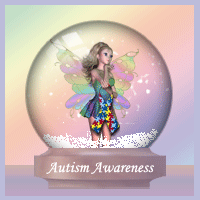 One of the things with autistic children often is a tendency to be repetitive in speech. At first, it is so great just to hear the words that having them repeated is a treat. But after a time, when you have been over and over some things a kazillion times, it becomes rather frustrating to contend with too.

While I understand that Maya doesn't comprehend everything, there are somethings that go on that do confound me. One is the issue of separation anxiety.

We deal with this problem every time Mandy gets scheduled to work an afternoon-evening shift at the restaurant where she is employed. If she works the morning shift, things are ok because she get Maya on the van to go to school, then leaves for work an hour or sometimes two hours later and often is home in time to get her off the van or if she's running late, Maya is ok with either Katie or with me getting her off the van. But the days when Mandy has to leave around 4 or 4:30 p.m. are really difficult because all we hear then, often for well over an hour, is whining, crying, wailing, sobbing, sometimes even the major-major meltdown of kicking and screaming too.

What I find amusing though, in a way, is the fact that when Mandy puts her on the van in the morning, there is no fear, no fussing, no separation anxiety then of leaving her mother in the dust, so to speak. And, on some days, when Mandy makes arrangements for Maya and often Kurtis too, that her friend will watch the kids at her home, there is no separation anxiety occurring then either. Just when she is left behind at home.

And no matter how many times you explain where Mandy is, why she left, etc., the next day you can be assured you will have the same conversation all over again if Mandy is working the afternoon detail.

This afternoon however, we decided to try some other distraction to see if it would ease things up somewhat. Before Mandy left, Kate took Maya for a walk down the road, to the bridge that goes over a little creek that runs behind our house. The name of this "stream" -if you want to call it that -is Moravian Run but for as long as I can remember everyone in town has always called it the "Sulfur Creek" because the water in this stream has been polluted for many, many years by the old coal mines initially and then, later by people running their wash water and septic or even in many instances, raw sewage into the stream. My kids, when they grew up, nicknamed it the "Poop Creek" because even that recent there were still people running raw sewage into it. (Since the sewage system lines went in a couple of years ago, that issue should have been resolved now but it's still debatable whether every single household is actually connected to the sewage lines as they are supposed to be, so that name may still be somewhat applicable, even today.)

When Kate and Maya returned, as soon as Maya walked into the living room, she looked around and with a very suspicious tone in her voice -along with some kind of dirty looks in my direction too -she asked "Where Mommy Go? Where Mommy's car go?" And I started my standard answers - Mommy went to work. Mommy drove her car to go to work. She started to say "I go to work with Mommy." which would have led into more and more of these refrains and I told her, "Maya, you know you can't go to work with Mommy. You know she's gone to work. Let's not talk about this."

So, amazingly enough, she did sort of change her tune to asking me if we could go to the grocery store. No, can't do that. Next question was well, we can go for a walk -no, you already did that. So I asked her then if she had a good time walking with Kate and she said yes, she did. Well, what did you see on your walk was my next question and she replied that she had seen the water.

Gotta love the responses you get at times ya know.

We've had a major crisis ongoing here though for the past day or better that I thought was going to really do me in though.

Back before Easter, Mandy had ordered a little spoon and fork set for Maya as part of her Easter basket gifts. She thought it was something Maya would really like because the handles on each item consisted of laminated photos of those lovely "Bratz" girls, ya know -and if Maya is all about anything, it has to be her "Bratz." Well, the item was back-ordered and didn't arrive until last week - either on Thursday or Friday -so Maya had it given to her immediately then and yes, she was overjoyed with this gift. Had to have it for every meal, you see.

At dinner on Sunday, it was a big production that she had to have her Bratz utensils and the same thing happened Monday night at supper too.

The spoon was present Monday morning because Maya had used it and when I washed up dishes from breakfast and lunch Monday, I distinctly remember putting it in the silverware drawer with the other items. But when it came time to eat Monday night, the spoon had somehow or other gone missing.

Horrors! This was a calamity beyond belief. Maya went into the repetition phase before supper "Where my spoon? Where is it? Where is it?" Over and over -yes, you get the picture by now. Telling her we had searched every drawer in the kitchen and it hadn't turned up didn't help at all. Where did it go? I wish I knew.

And Tuesday, when it was time for supper, we went through the whole Q&A thing again -and again. Each day, both Mandy and I had hunted everyplace we could think of that the spoon could possibly be and no results.

Tonight, at supper, I had to listen to the litany all over again. I was thinking if I have to, tomorrow I will go see if I can find another set at least similar to this one just to take her mind off the missing spoon -if that was possible to achieve.

Later this evening, Maya was playing in the living room and for whatever reason, I really don't know, but she went over to Kurtis' little bike he got for his birthday and the seat on this bike - just like the seat on Maya's bike -lifts up and there is a little "storage area" of sorts under the seat and she lifted up the seat and exclaimed "Well! There's my spoon!"

Now you tellme how in bloody blue blazes that spoon made it from the kitchen silverware drawer and into the living room into the seat of that little bike?

The mystery is solved yes and the case closed even though we don't know which of two particular little people in the house may have placed said spoon in there because it is entirely possible that the little guy somehow picked up the spoon and put it there although since I don't think he is quite up to the task of opening the silverware drawer, I rather suspect a certain four-year-old took the spoon and placed it in that little compartment.

But if anything goes missing in the future and we can't find it, we'll at least now have a clue to go look in the bike seat for things, won't we?

it is very interesting how the mind works.....they get fixated on something and there is no letting go....my youngest daughter had a thing about her socks...had to be a certain way...had to be right height....no ribs...oh my goodness....but she always knew if I tried to fool her....kids...they know.....

the mother of this lot said...

Bet the bike will be the first place you look for anything now!

I left you a little something on my blog!

When children with autism get something fixed in their mind they can talk about it for hours and yes, the repetition can be very annoying and frustrating. These kids are SMART and when we try to fool them, they know it. That said, Maya just may not like to see her mother leave. Brandon never had this trouble with his Mom, but with me. I was his caregiver and was with him most of his waking hours, so he became very anxious when it was time for me to leave. With Jordan, who is not on the autism spectrum, it was his Mom that he disliked being separated from.

I found when Brandon was young and he had meltdowns that the best thing to do was leave him in a quiet spot until he calmed down. This broke my heart but it had to be done. We also found we had to be very firm, like you said you were with Maya.

If I can be of any help, be sure to let me know. Children on the autism spectrum are a challenge, but such darlings. I will keep Maya and her brother in my prayers.

BTW, I have a feeling that it was Maya who put the spoon in the little compartment and then she forgot.

You have the patience of Job I swear.

I always think there are gremlins hiding things from me. HAHA

Great to see you got awarded my Spreader of Love Award, looks good on you.

Hi there, just dropping by to say Hello,

I found your blog from the Big Bang Master List.

Have a nice day.

I can't imagine how that repetition tries the patience.

You know, I want to send a hug out to Mandy, because it is really hard as a parent to deal with a child's separation anxiety. As much as the child is distressed, it wears on a mom's heart too. I remember Ian's anxiety and weeping when I left and crying all the way to work. Similarly, I would cry if I think he DIDN'T miss me either (maybe it's me!). I hope that it gets easier for Maya during those times and for Mandy too.

Oh to have your patience. God bless you!
Thank you so much for your comment on my blog. I truly appreciate it!

I agree, your patience is astounding. You are doing a wonderful job dealing with the challenges of raising this amazing girl.

I used to do repetative questions as a kid. For some reason hearing the same answer over and over made me feel secure.