Lazin' Away the Day

Saturday afternoon -things are pretty quiet now. The TSS for Kurtis was here today from about 9 a.m. until 3 p.m. so after the kids had breakfast, Mandy and Andrea (the TSS) took the kids for a nice long walk up the road.

While out, the stopped at Patti's house -the friend who brought the bunny down to visit Maya on the night before Easter -and the kids got to see some more animals. Mandy says stopping by Patti's house is like having your own private petting zoo almost in your own back yard! Maya saw a turkey today, chicks and of course, the bunny in a slightly larger version now. Seems to me they named some more animals too but be darned if I can remember them now. When they got home though Mandy had Maya tell me whose house they'd been to and had her name all the various animals she'd seen too. She did really well at remembering Patti's name and also, all the animals they'd seen.

Mandy and Andrea also had both kids out in the front yard too playing with them and with a bottle and wand to blow bubbles. Seems both the little ones as well as the Mommy involved had a pretty good time playing there, don't'cha agree? 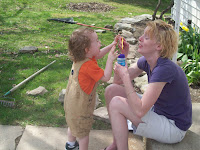 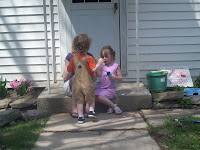 I like how on this one below you can also see how some of our flowers in front of the house are blooming, others are coming up and starting to bud. Not the most organized flower garden in the world, but still the flowers look so pretty and springy! 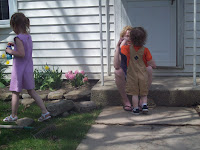 This one below here is taken looking down the road -no flowers coming up yet on that side. That's Kurtis and his TSS, Andrea, watching something apparently up along the road but since Mandy and Andrea were taking the pictures while I was in the house reading, I have no clue what they were looking at there. 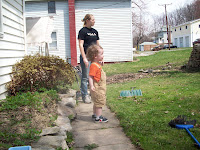 The past two days have brought some bad news here too though. Yesterday, Bill's father -who is 72 years old -was taken to the hospital by ambulance and admitted. They're still running more tests on him today but the initial diagnosis was that he is apparently having mini strokes which are having a huge impact on his memory. Then today, Bill learned the guy who owns the garage and used car lot where Bill works part-time collapsed this past Tuesday at his home and has been in another local hospital since then, on life support. He's only in his early 50's and this is really very bad news to hear. Say a pryer if you will for Pap and Gregg, please.

My son left Wednesday morning for a run to California and yesterday he called to say they made it to California ok but are going to be stranded there for at least two days because the clutch went out in the big truck. So he rented a car and drove over to Laughlin, Nevada to spend some quality time with his Dad while the truck is being repaired. He'll have his sisters super-super jealous with all the time he's been able to stop and visit with his dad of late.

And now, I think I shall go lay down a bit, give the eyes a little rest as well as my backside too!
The weather is starting to grey up so guess those changes I said I was detecting in my lower limbs and joints earlier are arriving on the scene now too.
Posted by Jeni at 3:46 PM

My blooming flowers make me feel so happy. I puffy heart spring!

Isn't it nice that the weather is finally better so that people can get outside and enjoy it? YAY!

Looks like the kids made the most of a nice spring day!

Don't say the weather is "greying up!" But I noticed the same thing today.

Those children look so happy outside today.

greying up..sounds like something I'd say.. and do say.

cheers and happy what's left of the weekend :)

Jeni, you simply need more things going on in your life to keep you busy. LOL!

I just love it when the flowers start blooming ~ The first thing I noticed in your pictures is that everyone is in t-shirt and shorts. It must be warm - I'm craving warm right now! LOL!
Saying a quick prayer for Bill's Dad and boss...

wow lots going on. prayers for Pa and Greg on the way-hope things turn out ok.

Saturday was a great spring day wasn't it. It is a bit gray today but the sun seems to be trying to say hello.

love the pictures. hope you get lots of well deserved rest.

Looks to me as though everyone is having a grand time. We had a turkey land in the back yard last winter, and he spread those big old feathers on his backside...beautiful! I love bubble blowing to this day. It's a good thing your son is getting to see so much of his Dad...ok, Jeni...gonna run girl, be back for more pictures later!
Sandi