KABOOM! Crash, bang, rumble and other odd noises along those lines got my attention -big time -here at about 3:45 this morning.

I was sitting at my computer (what else is new? I know,) having almost finished reading all the blogs in my reader. I had hoped to have finished that earlier this evening but by 11:45, my eyes were giving out on me, telling me they were in dire need of sleep. Mandy took over the computer controls then for a while before she went up to bed at about 1:30-2 a.m. or so. And I woke up then, felt rested -at least enough so to finish my reading at any rate.

And then, this huge noise - sounding like an explosion of some type, coming from the basement area of the house. It definitely got my attention - for sure.

I jumped up and hollered "Did you hear THAT, Mandy!???" And then, I headed to the basement door and discovered the cause of that racket.

This is what I saw when I opened the cellar door.

The back wall along the cellar way wasn't supposed to look like THIS. See those three brackets in the center -between the two loaded shelves? Well there was supposed to be a third shelf there. One that was equally well loaded with all kinds of canned goods and such. I didn't think to take pictures of all the canned good laying all over the cellar steps at the time -that idea came to me while I was writing this so I went and took these pictures then.

But, after seeing what was left of my old shelf unit there, I came back to the living room about the same time then as Mandy was stumbling down the steps to find out what had happened. I told her I knew what happened and for her to just go open the cellar door. Needless to say, her first words when looking down the steps were -"OH, SHIT!" A bit milder a comment, I must say, than I had when I viewed the carnage. We won't go into my under the breath mutterings, as I'm sure you can imagine what words were going through my mind!

We were going to go about our business as usual and wait till morning to pick up the cans and such but about then, Bill came downstairs too - rubbing his eyes and asking what happened. Mandy told him to go look in the cellar and without looking, he said "The shelf collapsed, didn't it?" Yep, it sure did! He then went and started picking stuff up a bit mainly because he was concerned that there may have been some glass broken. THere was a little bit of glass -from two packages of light bulbs that got hit as the shelf broke and the cans started rolling.

Here's the added mess to that area of the basement now. This area is where the washer and dryer are located and as usual, Mandy had clothes in the washer, a load in the dryer and several containers sitting near the washer and dryer with MORE clothes to be washed and dried too. So all that, plus the cans still laying on the floor, under the stairs and piled into a box now as well as a big hard plastic serving bowl (picnic type) that Mandy and Bill shoved some of the cans into -well, our basement in this area is not a pretty sight at any time and it really didn't need the added "trim."

Yep! This is what our laundry area in the basement looks like now!

A lovely mess, isn't it?

But then too, it's my own fault.

Never should have loaded those shelves quite that heavily. I know, I know. Live and learn -a little anyway, don't we?

But now I know what I'll be doing in the morning. 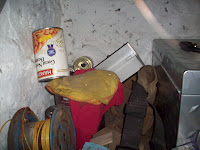 Go get a new shelf.

Get Bill to put it up.

Make sure it is a very heavy duty one too -built to hold oh, maybe let's say a ton of canned goods.

Here's the shelf that broke - what it looks like now. 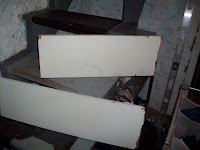 Maybe we should consider getting cement blocks and bricks along with some wood and do the shelves up right this time?

I just realized too - I think I had a big jug of the clear karo syrup on that shelf and as I was looking through the rubble, I didn't see where it had landed any place. Hmmm. If that puppy is lying broken someplace, that' s really going to add a lot to the clean-up work now, isn't it?

And the little boy -in his playpen, just an arm's length away from me in my chair by the computer? He slept through the whole thing! Didn't flinch, didn't stir, definitely didn't wake the little guy up!

And for that, I am eternally grateful!
Posted by Jeni at 4:24 AM

Dang! That's going to be a chore to clean up.

Don't you just hate when things break or go wrong in your house. That just bugs the crap out of me until everything is right with the world again.

I have a leaking water value behind my toilet that will take a plumber to fix, and it's driving me crazy...seems no one wants to work anymore!

I am so sorry that happened!

And Mushy.. I agree with youWe had trouble finding a plumber too!

What a palaver. What a mess to clear up and the little one slept right through! Many thanks for coming over to me!

Not very nice but at least you know what it was, it is the noises that I can't figure out what they were that bother me.

Oh man! Hopefully nothing got spoiled.

Be sure to get extra duty brackets for that new shelf...and you might want to reinforce the other shelves too!

And I am amazed that didn't wake up your grandson! WOW!

I popped over from David's to read your post.

Why do things like that happen either last thing at night or just when you're on your way out to work? :(

Always in the dead of night eh? What a mess. :(

Glad the little fella slept - that would complicate it further at 2am! Over from David's blog.