Now, To Get Organized!

I finally finished what will possibly be the last tabletopper I may be doing in 2010 yesterday morning. Now, I'm working on a counted cross stitch picture that -if all goes well and I don't go blind from it -hopefully I will be able to complete it in time to give it as a little gift for someone special to Mandy, the kids and me. Not naming any names here because I know she sometimes reads my blog and if I don't get it done, or manage to muck it up and can't give it to her, well, that just wouldn't be right now, would it.

But anyway, here's a couple of pictures of the last two tabletoppers I completed this year. 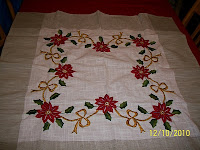 This one was one of my favorite pieces! I sort of have a "thing" I guess for Poinsettias as I have made several now over the past two years that involved poinsettias. 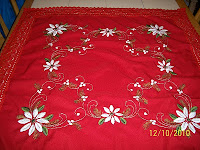 And this one -I fell in love with this one when it was first brought out about a year ago by the crafts place where I generally get all my embroidery stuff. But the base price of it was way out of my reach so I was just hoping that sometime they would put it on sale and finally, in mid-November they did. It wasn't the best price I've ever seen for a tabletopper but they had at least marked it down to a price that I felt I could spring for it and I really enjoyed doing this piece. Only took me about 10 days in all to get it finished which really made me very happy too!

Around the house, things have begun to change a little bit with respect to Maya. She finally now has a friend, a year younger than her, but who lives about 4 houses down the street from us and the two girls have begun the process of forming a friendship. For Maya, this is the first she's had an opportunity to have a friend nearby and close to her in age as well as interests too. However, this is now also bringing about a new problem for us with her!

She has gone down to this little girl's house a couple of times now to play and this week, was invited down there Monday evening for a little birthday party for her friend too.

All of this creates a lot of weeping then after she has to return home. And we have to keep explaining this friendship process again and again to her. Most kids, by the time they get to Maya's age, have several friends in their own age groups and such but this is the first Maya has had an opportunity to experience this in her life.

The first day she went down to her friend's house, the little girl and her mother had walked up to get Maya and she was allowed to take her bike down there that day. As I watched out the window of the front door, Maya and her friend, side-by-side on their bikes and the other little girl's mother walking behind them I was struck by the differences in Maya's life at age seven and how my own life was at that age.

By the time I was seven, I had several girlfriends the same age and we were pretty much on our own -allowed to play outside year-round -riding bikes when the weather was good, sled riding in the winter, building snowmen, making angels in the snow together too in the winter and never did we have a parent supervising every single activity we had back then. Maya has never been able to just go outside and play in the yard alone or even with friends -mainly because she still isn't that observant about things that could create a dangerous situation for herself or for others.

And I just think that is so sad to realize how much fun she has missed out on because of her not realizing things that could harm her -or Kurtis too. She needs to learn those things to develop her sense of independence.

Today was finally a fairly decent day for me! The darned injection I had to have last Thursday -required after each chemo treatment -really did a number on me this time as it left me feeling like I had been run over by a steam roller or some such thing and just flat out exhausted too! Six day it had me in its grip and boy, what a good feeling it was to wake up this morning and NOT feel like that -all achy and still as tired as I was before going to bed, ya know!

Even had a little incentive to do some surfing a bit today, playing on some survey sites I signed up for (desperation breeds strange bedfellows ya know when you're trying to find little ways to add a little funding) but some of the sites piqued my interest in other things too -one being custom laptops -which really amazed me as to all the various programs and such some of them can be loaded with. (I saw some that even had fingerprint technology on them! Imagine that! Wonder if they are special computers for private investigators or something like that?) Of course, the prices were wicked on those models too but still, it did fascinate me that you could get a computer with stuff like that. Just goes to show how little I know too, I guess, doesn't it?

I've been putting this off now all week but by the looks of things with respect to the weather forecast here for the weekend and for the beginning of next week, it looks like I'm going to have to call my doctor in Pittsburgh today now and cancel my appointment scheduled for Monday afternoon. They are calling for sleet and ice this weekend here -which is going to make the St. Lucia Day program set for Sunday evening (with a big pot luck dinner then too) difficult for people to attend and I really hate to see that happen as I very much love this particular celebration at our church every year. And Monday, they are calling for snow and nastiness again and neither Mandy nor I will attempt to drive the 130 plus miles, one way -from here to Pittsburgh and back in weather conditions like that! Better to stay home and try to reschedule the check-up I'm thinking.

So, there you have it -all the news from this house that is fit to print I guess! Maybe next week, if my energy holds up for me, I will get in the mood to do some baking for the holidays. I really shouldn't do that because that's putting temptation out there, right smack dab in front of me with the cookies I do love to make and don't need them wreaking havoc then with my flood sugar levels nor with my weight! How the heck do I get around that without eating at least a few cookies anyway?

That will probably be my next dilemma I suppose!
Posted by Jeni at 1:38 AM

I get a chuckle out of your "all the news from this house fit to print".
Great news to hear about Maya's learning friendship and experiencing a new freedom that is safe for her.
So glad to hear you are feeling better now after six days of effects from the injection. Wow.

Your needle work is beautiful. What a lovely gift of love in making someone this beautiful gift. How wonderful that Maya has made a friend...I am sure she will learn the longer she has this friend...but I so understand having to see and hear their sadness.

I am thankful to hear you are feeling better after the injection. You are wise to look ahead with the weather...we have to do that here too...we are suppose to get snow today and tomorrow and supposedly Sunday's high is going to be in the negative digets. Ugh! I would rather have snow. :)

I so get you about the holiday baking...I have done some and it's so hard not to have a few bites here and there...and well we know all those bites add up...I will do more baking because of my family but if it were just me, I wouldn't.

Hope you have a wonderful weekend...stay warm and safe. XX

Those toppers are gorgeous.

It does indeed look like you have a "thing" for pointsiettas but you do such a lovely job with them, it's easy to see why! Ten days to do that one topper, huh? Dang, you must spend hours a day with that needle!

Glad to hear that you're feeling better and less like you've been run over by a steamroller. Hopefully you'll be feeling better through the rest of the Christmas season as I'm sure you've got a ton of things to do and places to go, people to see, goodies to bake, etc. Seems like it's non-stop this time of the year so I suspect you'll want to be at your best.

I haven't baked much of anything at all or done any decorating or wrapped any of the few gifts that I've managed to actually buy so far. Talk about being behind! I'm hoping to get some stuff done this weekend so if you aren't too busy, keep your fingers crossed for me!

I'm glad Maya has a friend so close to home
I'm sure that with explanation and consistency Maya will understand she can visit but not live there :)

I wanted to tell you how lovely your comment about Elizabeth Edwards was, thank you

I'm so happy for Maya that she's found herself a little friend. Hopefully she'll figure out soon enough that her friend isn't going anywhere and she'll still be there for her even if she doesn't see her all day every day.

Your table toppers are beautiful. I am always so impressed with your talent for needlework.

Glad to hear you are feeling better now too so you can enjoy these days leading up to Christmas!

the toppers are beautiful!

Friends come when the time is right for them, and we learn that friendship is not always easy and that is not easy either.

I think I'm baking next week too
:-)
yumm cookies

Your tabletoppers are so beautiful and you are so darn fast at them too! Wow~ Your friend is going to love it so much.
Happy stitching!