No Rain on This Parade!

Last night, Mandy, Maya, Kurtis and I went down to Snow Shoe -a town about 13 miles down the road from our place -to view the annual Snow Shoe Fireman's Carnival Parade. Although, I'm not really that big on parade viewings and such, I went along last night mainly because our school band was participating in the event and as such, it would be the step-granddaughter's debut marching with the band as a majorette.

Here's the first entry in the parade as they marched past us -the flag bearers, all members of the Snow Shoe VFW Post. 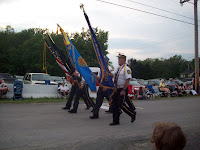 And here's the women's counterpart of that unit too. 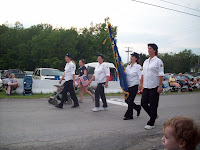 Although Snow Shoe is bigger than Grassflat, which is where we live, it's not a big town exactly. It does have a nice supermarket, a hardware store, a pizza shop, truckstop restaurant (where I slaved for about seven years 20 plus years back), a florist shop, bank and two other main staples of life -a State Store (liquor store in Pennsylvania) and a beer distributorship! Ah yes, priorities, ya know!

But, I was really amazed, considering that Snow Shoe, just like my home town, is situated out in the mountains, in the wilderness, or as we tend to say here -"In the boondocks." But for a town not THAT large, they did get a very good turnout for the parade, not just of spectators who lined the road through the borough and filled the parking lot at the campgrounds where the parade ended, but they also drew in fire companies from several outlying communities to participate in the parade as well.

Fire engines and emergency vehicles from as far away as Boalsburg and Centre Hall, some from little companies a bit closer too -Milesburg, Bellefonte, Howard, Pine Glen and Karthaus -like some of these units. 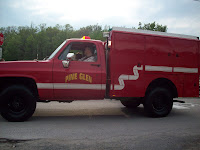 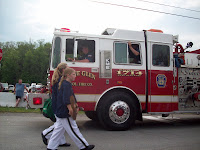 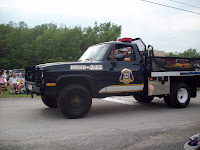 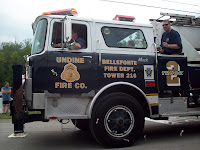 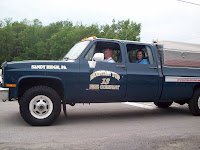 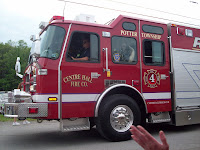 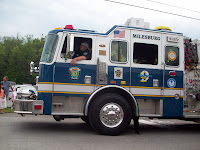 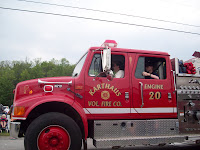 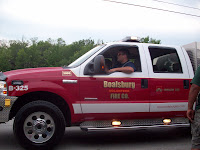 In addition to all these fire companies from adjacent communities, there were two high school marching bands present. The first -in the blue and gold colors is the Bald Eagle Area High School's band -this being the band from the school where the kids from Snow Shoe and Moshannon -mountaintop kids, as they are known around here -attend. The other band taking part was from our school district - West Branch Area School -and it was their participation that sparked Mandy, the kids and I to attend. The reason being Miss Katie is now a majorette with our band. So here's some shots of the two band groups: 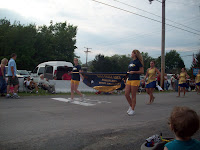 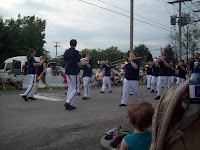 The two photos above are of the color guard and then the band for Bald Eagle Area High. The next group of photos are of OUR band from West Branch, beginning here, just below, are pictures of our color guard, followed by the majorettes, then the drum major and finally, by our band. As I started to snap pictures of our band passing by, wouldn't you just know that is when my camera began to "process" after every picture I took otherwise I'd have a whole lot more pictures to post here! 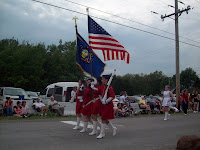 Here's the first shot of our majorettes -the one in the middle is our Katie; the one on this end is also a Katie -our next door neighbor, Karen's daughter. She is also the granddaughter of my good, lifelong friend, Kate. Whole lot of Kate's and Katie's in the neighborhood, huh? 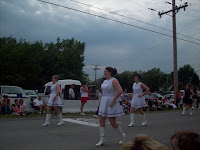 Here's another shot of OUR Kate, the majorette! 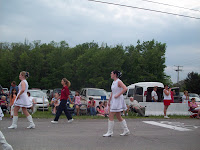 Here's the drum major for our band, leading the musicians along the parade route. 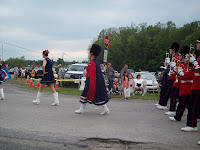 Here's a little shot of part of our band too as it went past our location. 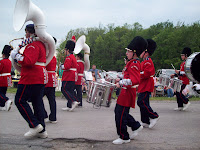 And here's our neighbor, Karen -whose daughter, also a "Katie" is a majorette. 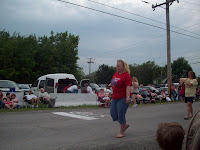 There are still about 30 other pictures from the parade but consider yourselves to be lucky that I didn't post every single picture on here! Right now, you see how tired poor Karen looks from trudging along beside the band -well, that's sort of how I'mf feeling right now.

Did I mention that our bad is going to Florida next week -to perform at Disneyland in one of the parades there? Yep, they are leaving early next week to perform down south -quite an honor for a band from a relatively small school -by standards of many other schools in our area. Our band is considered to be a very principled band and as such, has b een invited to several high level parade functions over the past so many years.

So now, enjoy the pictures and imagine if you will, the smart martching rhythm set by the drummers and the horns playing. Pretty neat, that part was!
Posted by Jeni at 10:16 AM

Oh I know the kids loved the parade! There's nothing like a parade, the marching bands, the floats, the heroes...wish Id been there! Hugs to the kids
Sandi

I'll bet Kurtis LOVED all those fire trucks. I have a couple of boys that would still enjoy a parade full of fire trucks, even in their advanced teenage years.

Thanks for sharing your pictures. I missed our city's local parade last week due to having to get my daughter to her softball game. She of course, made sure to get to the carnival in the following days to ride the rides and hang out with her friends.

wow i love a parade! poor little podunk, when they have one it's over in a minute, but they have them for everything!

maybe if you could be in one you would like 'em a bit better.
But you are a good grand mother for supporting. thanks for sharing the pictures.

Parades are fun. I remember when my sister was in high school band, we used to go all over the place to watch them march in parades. It always ended up being such a fun time.

Congratulations to your school's band!