Today was a big day, indeed it was!

After three years of communicating via blog posts, e-mail and also Facebook, I finally had the chance today to meet Mr. and Mrs. Skittles! No, that's not their real names - Skittles has a nifty blog and if you follow her at all, you know her name is Barb and her husband -who she usually refers to as "Mr. Skittles" is actually Mike! No, Skittles is not their last name either but I'm not gonna divulge that aspect to you.

If you've ever read Mike's blog -which he used to have but hasn't been a participating blogger for quite some time now -he often used to mention his fascination for trains and such. He and Barb also love to take off and travel, kind of randomly, sometimes a bit haphazardly too, but they had decided they wanted to make a trip over to the Altoona, PA area so they could see the world-famous Horseshoe Curve and also, possibly stop by and visit the Railroader's Museum which is also located in Altoona and in deciding to come this way, they remembered that I live fairly close to Altoona -about 50 miles north of that city -so they made arrangements to stop by my house this afternoon (Saturday, that is) for a little visit over some hot coffee.

Initially, Maya decided she wasn't going to be social at all although Kurtis made friends fairly quickly and easily too with both Barb and Mike. Sammy, the dog, was apparently overjoyed at meeting some new folks though as he managed -on his second try -to hop up in Mike's lap and proceeded to give him several "doggie kisses" then too!

The kittens however must have initially decided to follow Maya's lead though as for quite awhile we couldn't find any of them but then one by one, they appeared and visited too for a little while. Although we did discuss the prospect of shipping one, maybe even two kittens back to Michigan with Barb and Mike, the idea was eventually deep-sixed.

Here's the first (of two) photos I took today. (I get to chattering and forget that I need to take some pictures ya know, so that's why I only got two photos.)

Actually this is video but I didn't realize when I went to take the picture that Mandy had been using the video function on my camera recently and hadn't bothered to switch it back to regular pictures. It's only about 2-3 second and looks more like it is a regular photo but I liked it as I thought it was a very good picture of Barb and Mike. Don't you agree too? 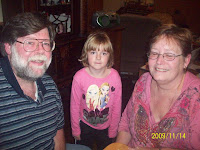 Eventually, Maya decided to be at least semi-sociable and posted with Mike and Barb for this picture. She could have done a little better on the smiling but what the heck you gonna do with a six-year-old who can have a really big stubborn streak at play at times?

I wish I'd taken the camera outside with me though because before they left, we got to see their beautiful chocolate lab, Hannah, who was riding along with them on their tour of Central Pennsylvania. And when Mandy came out to meet Hannah, Maya decided she had to come along too. That's when she really wanted to be very sociable with Mike and Barb. Mandy went back inside and brought Kurtis out to meet Hannah too and he absolutely loved that dog! Even tried to say her name for us too. It wasn't the best pronunciation of Hannah but at least he gave it the old college try.

I spent the rest of the day baking -made four pies -apple, cherry and two pumpkin plus I made a nice big homemade beef and vegetable pot pie as well. Used up the leftover roast beef and gravy from our dinner this past Sunday when I had tried the infamous potato and carrot disaster casserole.

Remember I think I mentioned when I posted about that lousy casserole that Mandy had decided she had to take a picture of the dish -for posterity, ya know? Well, I finally got around to downloading all the pics on my camera tonight and lo and behold, there it was!

And now -brace yourselves. Hope no one gets sick from looking at this beastly mess. But here's what the casserole of Cheesy Potatoes and Carrots looks like. (And trust me, this is not what it looked like in the picture in the recipe book cause if it had, I never would have tried to make the damned thing!) 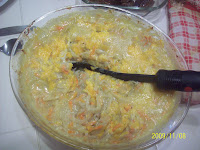 I wish I could say that as ugly as this looks, it tasted good but that wasn't even the case with this concoction either. It was just bad, bad, VERY BAD!

And that pretty much gives you a little bit of a run-down on my visitors today plus some unpleasant food to look at too.

I have to say too after three years that Barb and I have been communicating, it was super nice to finally meet her. I do know her voice though as she has called me on the telephone a few times so I can usually recognize her via that medium but now, there's just such a much more complete feeling once you've finally had a chance to meet that person, face to face.

Hope we can do this again sometime too, Mike and Barb!
Posted by Jeni at 11:17 PM

I thoroughly enjoyed getting to meet you, Mandy, the kids and pets!!! Thank you for your hospitality and for the best damn coffee I'd had in three days.

My posts will start tomorrow. =)

(I knew my eyes were shut in the 2nd picture. LOL!)

I couldn't wait. I did the post about our visit already. LOL! Your visitors can come over and read it and see the pictures.

That's great! It's really awesome when you get to meet a blogger in person.

Oh Jeni....that is just great...I love the photo of Barb and Mike....yes Mike is a huge train fan...I am hoping that one day they might make it up my way ....there is a great train museum in my little town that I think he might appreciate. Barb looks so happy and healthy in thoses photos albeit one she has her eyes closed but you looks good all the same.

Glad to here the baking and cooking went well....don't you just hate it when you go to all that trouble to make a new dish and it turns out terrible....it makes you laugh.....anyhow girl glad you two had a fantastic visit!!

The Bloggers you met looked like really lovely people.Glad Maya decided to come round just as they were about to go. That is typical of children, isn't it?

Actually, that carroty cheese potato stuff didn't look too bad at all. I would definitely have tried it!

Glad it was a fun visit and that everyone enjoyed the visit, even the dogs. I'm glad you made use of the leftover roast, I always use mine in sort of a beef fried rice thing, but next time I will try to make a beef and vegetable pot pie. That sounds great.

So where was the picture of the three of you?? Hmm??

Glad you had a nice time and had a chance to meet a couple of bloggers - all of the ones that I have met over the last three years have been absolutely wonderful people and even more wonderful in "Real Life" than they are on their blogs.

Sounds like a good time. You made FOUR pies, plus a beefy one? When do you get time to do anything else, Jeni? You always seem perpetually doing something or other that would leave you no time to blog!

That is awesome that you got to meet Barb and Mike! Sure sounds like you all had a good time. Great pictures too, but I'm also wondering where's the one of all three of you? :-)

Nice that you could meet. I have met two of my blogging buddies one from about 360 miles south of where I am and another in Mexico. It is really nice after you have been communicating for some time.

Sociable or not, I think Maya looks beautiful and that's a lovely photo. It's so pleasurable to meet bloggers who you feel you know. We tell each other so much about ourselves.