I've been diddling and dawdling along here and didn't realize I hadn't posted anything since Saturday!

Not that I have been terribly busy, doing terribly important things though cause I sure as heck am never involved in activity like that. It's been just the same old, same old, run-of-the-mill stuff here, like always. Except perhaps that I am getting a bit more forgetful now and then.

That's my only really true excuse for the absence in posting over the past three days. Not that I had nothing to write about, ya know. Well, really I didn't, still don't for that matter.

Ok, Sunday morning -Mandy, Kurtis and I did go to church. Maya spent the night (Saturday) at "Aunt Carrie's house" and by the sounds of things, gave Carrie and Robert a run for their money with the 520 questions she seems to excel at doling out. Carrie had to go through many of the same questions that Maya has been hitting me with -"What's your Mommy's name?" and "Where does your Mommy live?" being the top questions it seems. She did have some issues with Carrie when told that "Grammy J is MY Mommy." Apparently Maya couldn't quite wrap that around her mind. But it wasn't enough to stop her from going on to bigger and better questions.

One funny thing -well at least Mandy and I thought this was quite humorous -is this little story Carrie told us on Saturday when she came here to pick Maya up and take her to her house. If you recall, I believe I mentioned at sometime or other in the past that Carrie's fiance, Robert, is slightly obsessive-compulsive. Ok, slightly is an understatement at times, as he can get really anal about a lot of stuff. One of them being he can't stand to see any laundry not done. And, it seems a while back, he spied some that needed washed but didn't realize that they were out of laundry detergent at the time -probably the reason why there were a few things needed laundered. But, undaunted by that, he washed the stuff anyway -stuff that included some of Carrie's underwear, etc. And, since there was no laundry detergent, he substituted by using, of all things, Pinesol! Needless to say, daughter Carrie was not overly impressed with him doing the laundry for them!

Mandy is now thinking about getting Carrie this for her birthday a month from now -a big, big box of Tide or Cheer or some other laundry detergent. I suggested that perhaps she and Clate could both buy Carrie a big old box of laundry detergent for her birthday to try to prevent them running out of the stuff anytime soon. I'm not too sure if Carrie would see the humor in that gesture though.

At church Sunday a.m., Kurtis actually did quite well, all things considered. Mandy only took him out to the narthex three times during the service and then, it wasn't because he was screaming, crying, but rather because he was getting to rambunctious and wanting to roam all over the place! The third time she took him out, as she gathered him up and headed to the door, he looked at her and just said -quite audibly -"Oh, Okay." Said comment did bring forth more than a few chuckles from others in the congregation.

Sunday night, Bill took Kurtis back to bathe him and get him ready for bed -something he usually does most very night with the little guy. It kind of gives Bill a little bit of quality time with Kurtis that way. Well, he stripped the boy down and then, while he was running the water for the bath, Kurtis then did his normal thing -running from one end of the bathroom to the other. He has a fixation about this routine -has to start by the radiator, touch that, then run to the opposite wall, touch that and then back to the radiator. Lather, Scrub, Rinse ya know. Well this time, during one of his runs back and forth, Bill said he suddenly came to an abrupt stop, stood there for a few seconds while he made a little deposit that Bill claims landed on the floor and bounced about a bit too. So, as a result of that, Bill not only had to scrub the little fellow clean but he had to wipe up the little bit of "crap" that trimmed the floor then too!

Moving along -I finally finished the trivet. No, it's not the neatest project ever done as you will see on the photo here. (I had marked off the dimensions of the aida cloth but forgot that I had the markings showing up on the right side of the fabric instead of the back so you can see those marks along the edges of the cloth in the trivet. Oh well, it's finished and it'll stay here in the house were we will be the only ones to see the error of my counted cross stitch ways! 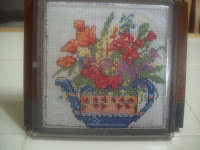 And here's a closeup now too of the lovely trivet. 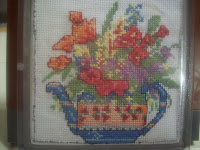 When I took the pictures tonight of the trivet, I realized that I hadn't taken any pictures of a project I did after finishing the large tablecloth and before I started messing up the trivet. I did a set of hand towels -terry cloth with a Christmas poinsettia flower trim on them. Here's how they turned out. 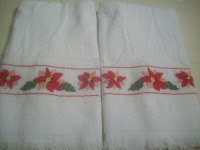 And here's a shot of just the floral design. 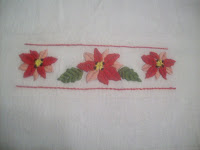 And yes, I started work last night on a new project -a set of cross stitched pillow cases! Not counted cross stitch though. Enough of that madness for a little while. These are stamped designs that I just cross stitch the floss over them. Hopefully, I'll have them done before my latest order arrives -which should land here this Friday or Saturday!

Kurtis showed off a bit for us Sunday night too with his vocabulary increasing a little bit almost daily now. Some things, he manages to say fairly clearly -others, well we can tell what it is he's trying to say but because he tends to not pronounce the first letter in a word a lot of the time, others might have a bit of a problem deciphering what he's saying. But anyway, Sunday night, he was a bit of a parrot. He was messing with something over on the sofa and when I saw what he was doing, I said "OH, MAN! Kurtis!" and he repeated the "Oh Man" perfectly. A little later, he was in his bed, supposed to be going to sleep (note the word "supposed") but he actually had grabbed something he wasn't supposed to have -don't remember what it was now -and I just looked at him, and said "Oh, Geez!" and he repeated that too -with the voice inflection just the same as I had used.

Yesterday, when Mandy had to take Kurtis for his FLoortime Therapy, in order to keep Maya happy since she wasn't going to go there with them, Mandy had made arrangements to drop Maya off at her friend "Jen-Jen's" house. Jen has three children -the oldest being around 17 and the youngest I think is around 12-13 years old and the kids, as well as Jen and her husband, Nick (who Maya calls "Nick-Nick") make a big fuss over Maya, playing games and such with her so she loves to go visit with them. When Mandy was on the way home, she called to tell Jen she'd be there shortly for Maya but was told that Maya said she wasn't coming home at that time. She told Jen to tell Mandy she wouldn't be home until "Black sky." Interpreted that means she didn't want to leave until it was dark outside. So Mandy brought Kurtis home, we had supper and by then it was "Black sky" outside so Mandy went and picked her up then.

Tonight, Maya was in a fairly good mood after she got ready for bed -just wanted to cuddle though with Mandy and the cat, Chino, decided she wanted to do the same thing so I got the camera out and took a couple of shots of Mandy with her arms -and hands -very full with Maya and Chino both wanting some extra loving I guess. 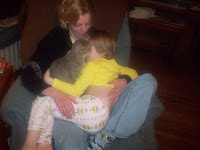 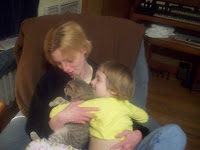 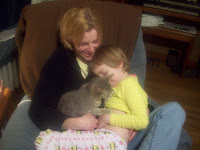 And this is what Kurtis was doing while all the cat and little kid cuddling was going on! 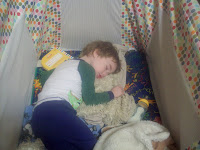 You have to admit he looks pretty darned angelic -and very peaceful there, doesn't he? I'm just hoping that angelic demeanor and peaceful sleep holds up now till morning and doesn't come to an abrupt halt around 2 or 3 a.m. that might keep me up then all night long!

So there you have it -my life in a nutshell -or blog post -for the past three days.

Such an exciting life I lead, huh?

The whole post was funny with the children's carry ons and the things they say and do.

The embroidery & cross stitch looks lovely! You are clever.

Your life seems very full and busy.. at least compared to mine.

I'm laughing about doing laundry with Pine Sol! Pine Sol is a joke with me anyway. If I ever want my home to SMELL like I've been busy cleaning all day, I just pour a little Pine Sol down the kitchen sink drain. :P

I just had to laugh at all the questions. Kids are all alike! Reminds me of all the "WHY?" questions I used to get from my oldest.

You are very crafty! Nice towels and trivet!

Typical, you start by telling us that there is not much going on and then post a VERY full account of the thousands of things going on in your life. What a truly contented woman you must be...to have so many loved ones around you, and your needlework! Well I can just about bear to sew on a button although I have done cross stitch.

Pooping just happens sometimes. Bwahahahaha. What a surprise for the both of them.

When you have little ones in the house things are always happening to sidetrack you. I so remember.

Your trivet looks great to me! Like I said, I'd never have the patience.

Maya says the cutest things. And she's adorable in those pictures snuggling with her mom and the cat.

Hahaha, that's funny! I think the 'slightly' obsessive compulsive the guy has is kinda cute as he washed the laundry! But then yeah, used Pinesol instead LOL.

Funny story about Kurtis too! What a weird and funny routine, running around the bathroom lol! He might slip!

I once washed a load of clothes with Palmolive dishwashing soap. After my mom screamed and hollered at me for about 25 mins then told my siblings how dumb I was, I've had an aversion to laundry every since:0

Anyway, what's the tivet for?

That nutshell would have to be large indeed! I get stressed just reading about it!

Re you comment:
1. Keep looking
2. Always carry a camera
3. Take many pictures and show only a few.