One Down, Another to Go!

Well, we survived Halloween last night but for a while I was a bit worried as I was afraid we would run out of candy way too early in the event. But luck held out until about 7:45 -with only 15 more minutes to go -we ran out!

And what an opportune time for it to happen too!

Just as six boys showed up -all obviously in the 15-17 year old range -and by that time, Mandy and the kids had returned from their travels so she went to the door and told the kids that she was sorry but we had run out of candy and furthermore, she kind of gave them a bit of a tongue lashing about the fact that maybe at their ages, they were milking the holiday just a bit. They were a bit put out by her speech, not even paying any attention to the fact she told them that our well had just gone dry and one of the bunch even told her, "We'll remember you next year!"

Here's the two little trick or treaters, all decked out in their Halloween finest garb. 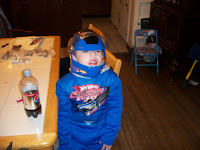 First here's Kurtis -as one really cute little hot wheels race car driver. (I was really surprised that he actually participated in trick or treating as he had been changing his mind all day yesterday. One minute he was going to dress up and go and the next minute, he was near tears, talking about scary skeletons and such. But when push came to shove, he managed to bring his courage to the front, dressed up and away he went. Still, I was fully expecting them to bring him home in about 5-10 minutes but he lasted the entire time -a good hour and 45 minutes! 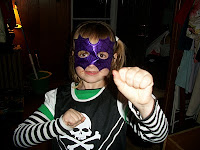 Both kids were still very excited about the fun of trick or treating when they got home -especially Kurtis, who was really wired for sound.

However, it had been a long day for both of them -especially him -and within 15 minutes, the fun of trick or treating was exchanged for the exhaustion of all that walking around and so, as often happens with one very tired out little boy, we all get treated then with a meltdown. Not as bad as some he's had but still it took a little while to calm him down and then, to convince him it would be best for him to get his jammies on and hit the road to dreamland.

But before that happened, this is a little of how things looked here! 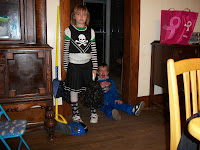 So, with Halloween for 2010 now history, next up in "importance" is tomorrow -or rather, since it is now after midnight as I write this, today -Election Day!

And brother, after all the non-stop ads on tv, all the flyers stuffing our mailbox -so much hype, so VERY much hype this year -I don't know about anyone else but I am gonna be one very happy camper after the polls close tomorrow night and the returns get tallied and we find out if the ones who spent the most come out the winners!

You know, come to think of it, the way Kurtis was acting in that last photo, and the look on Maya's face too could pretty much sum up my feelings this year about the whole voting thing!

But after the elections become history, we will move on to yet another holiday. Unfortunately, this one -which in my book is a truly wonderful holiday that everyone -regardless of race, ethnicity, religious beliefs or no religion -should take to heart and celebrate with every ounce within us but sadly, it seems often to be overlooked. Definitely not given its proper dues, for sure.

And that would be, of course, Thanksgiving!

I haven't yet heard any Christmas music playing anywhere but things have been going up in various stores about Christmas for some time already. Why the rush?

Don't get me wrong here, I love Christmas every bit as much as I love Thanksgiving but I really do hate to hear all the commercials and the way Christmas is presented in so many of them too.

I'm like my blogger buddy -up by Boston way -Suldog -who has been lobbying on his blog for the past several years now for people to wake up and give the homage and respect that Thanksgiving should, by all rights, have -especially since it comes roughly a month before Christmas!

To be honest, I'd even like to see Black Friday banned too as I think it puts too much on what those people in advertising would like to make us believe Christmas is all about -and that is shopping! Shop till you drop, ya know. Shop till you'll be struggling with credit card bills from this year well into the next decade if you aren't careful!

Jim is willing to allow Christmas advertising and such begin after Thanksgiving and yes, I do wholeheartedly support him and that tenet too. (But I'd still like to see Christmas be more about what it really represents -not what Madison Avenue thinks it should be.)

And to be fair then -to both these holidays as wonderful -and awesome as they both are -I do believe we should take the time during the days and weeks leading up to Thanksgiving to make that our first concern.

To think deeply, during these coming days, about what Thanksgiving does -or should -mean to each of us.

Perhaps take the time each day between now and Thursday, November 25th, to recognize something every single day for which each of us has had or has in our lives to give thanks for -family, friends, a job, retirement, school, health -whatever. And to be thankful too for being as blessed as we are to have this beautiful country, with a strong constitution and government that offers us so much, every single day!

And so, that's what I am going to try to do over the next 23 days -take time to be so very thankful for all the things -the good, as well as the difficult or bad -in my life. I'm going to try to do it not just as a mental thing but also, as a written one.

If I miss a day here and there, it won't be because I had nothing that day for which to give thanks, but just that sometimes, some days just don't seem to hold enough hours for me to do what I plan or want to get done!

And today -since it is officially now November 2nd, Election Day 2010, I am truly thankful that I have the right to go and vote! I may not be really enthusiastic about those I get to select from today but still and all, if I chose not to vote, I have then been one very ungrateful citizen, haven't I?

And I am also thankful that after tonight -no more nasty mud-slinging political ads on tv, or people reaching out to touch me, incessantly, via the phone to get me to put my vote in this or that column too!

Think about this a bit -mull it over -and then won't you join us in this campaign that Thanksgiving DOES Come First!
Posted by Jeni at 11:48 PM

I LOVE the costume pics, I especially love the "melt down" pic. :) Not fun while it's happening but cute pics for future black mailing purposes. ;)
And I must say, I am guilty of rushing thru Thanksgiving to get to my beloved Christmas. I'm still very much a kid when it comes to Christmas even tho as an adult I am certainly mindful of Thanksgiving, it's just been, as you said, overlooked.
Thank you for the "smack up side the head" Jeni. - For you, I am thankful. Truly.

It seems to me that when I was much younger there were no Christmas decorations or ads pushing the commercial Christmas until Thanksgiving and people were excited about the having together time with the folks they loved on Thanksgiving. People would travel distances to have a couple days together for Thanksgiving.

Nothing happened round here for Halloween. Britain doesn't seem to go into it in a big way here. (Not where i live anyway.)
Yes... I think we are all able to find things to be thankful for. Voting for women, being one of them!
Hope you are feeling well. You seem to be getting on amazingly!
Maggie X

Today, I'm Thankful for YOU, Jeni. Thanks!

Oh now don't go telling my teenagers that they're too old to go trick-or-treating! Jamie was kind of disappointed that she didn't have anyone to go with so she donned her costume and I took her up to visit my mom and my favorite aunt so that she could enjoy the holiday at least a little bit. I don't think it's the candy so much as the getting to dress up part that she likes - though the candy doesn't hurt!

I am so glad that today is finally Election Day as that means I'll get a break from all of the nasty political commercials at least until they start cranking them out for the next election - ugh!

Like you, I'm not excited about our election choices. I held my nose and voted anyway. I'm thankful that the election madness is almost over. :-)

I had to stop in Walmart today to pick up some prescriptions and greeting me right inside the door was a huge Christmas tree complete with a banner above it wishing all a Merry Christmas. That irritates me beyond words :-(

I too am so glad Election Day is soon to be history. When did elections start getting so ugly?

And Thanksgiving is my most favorite holiday. It's all about family, being thankful and good food!

I am so very thankful for so many blessings.

Glad that the kids had fun on Halloween and they both look so cute in their costumes. I wasn't too happy with the choice of candidates this year, either, but voted anyway. And I couldn't agree with you more about celebrating Thanksgiving first!

The kids look so cute in their costumes!

I think it's a great idea to recognize Thanksgiving throughout the month of November. I was at Target in the days before Halloween. They were already pushing all the Halloween stuff aside and putting the Christmas stuff out!

Came over from Suldogs place...I agree with your thoughts 100%...I went into Walmart yesterday and was greeted with a huge lit up Christmas tree and Christmas music was playing. WTH?

Amen on the Election, and thank God, and curse Citizens United.

What's the matter with those teenagers? don't they know they're supposed to be off drinking in the woods, not out begging for candy?!? ;-)

And amen on Thanksgiving Comes First, a club I was proud to join this year. Hooray for Jim, and thanks for your contribution as well.