Getting Used to Things

Although it's now been over 18 months since Mandy and the two grandkids moved down to Middletown, apparently -judging by my mood tonight, I still haven't fully adjusted to not having them here with me.

Last week was a bit of a zoo here as we were all still adjusting to the shock of my son's house burning a week ago this past Wednesday afternoon. People were bringing boxes and bags and bags of clothes as well as kitchen goods and bedding down to my house (and probably many were taking things to Chantel's parents' home too, to help Clate and Chantel get back on their feet. 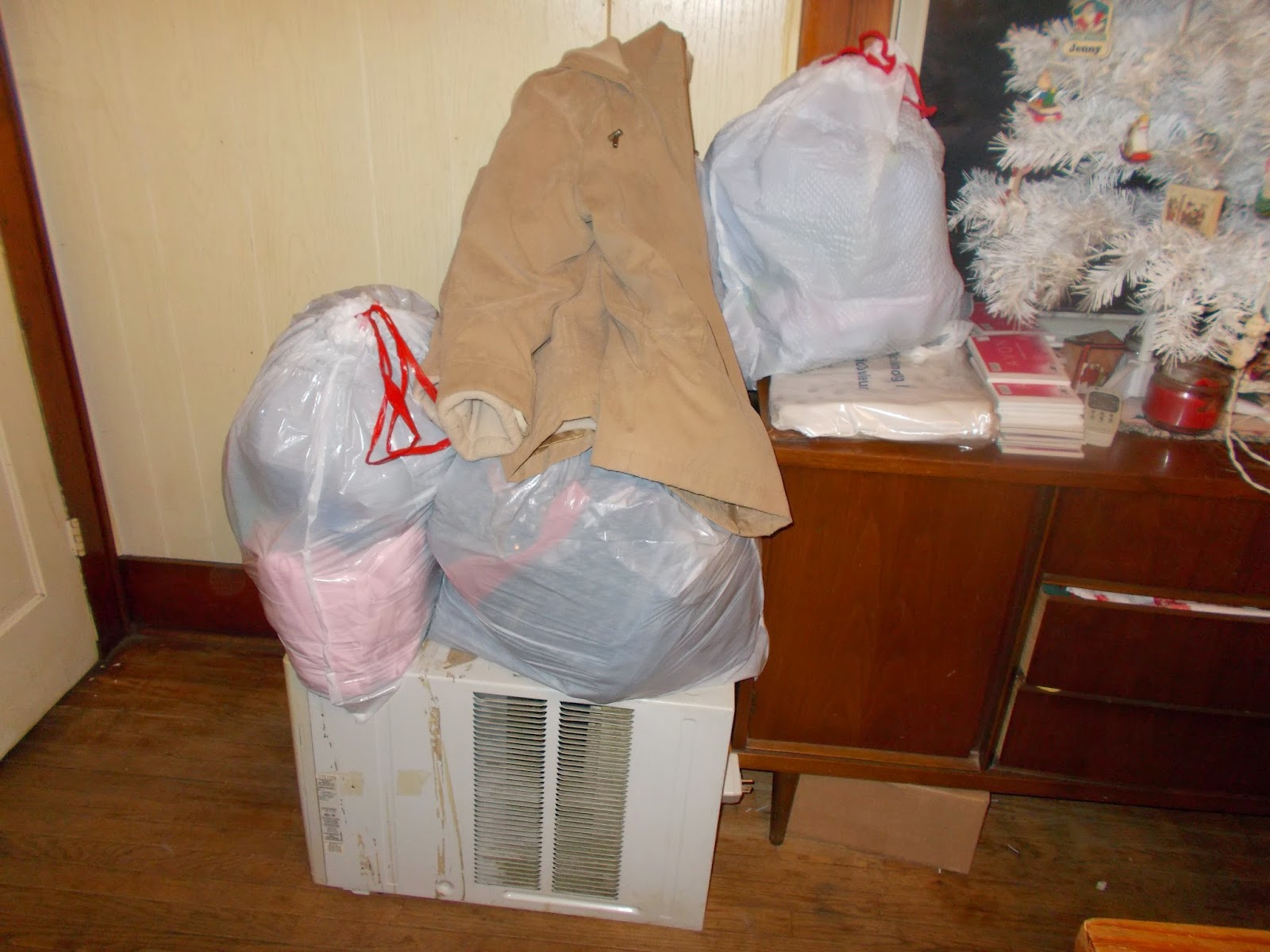 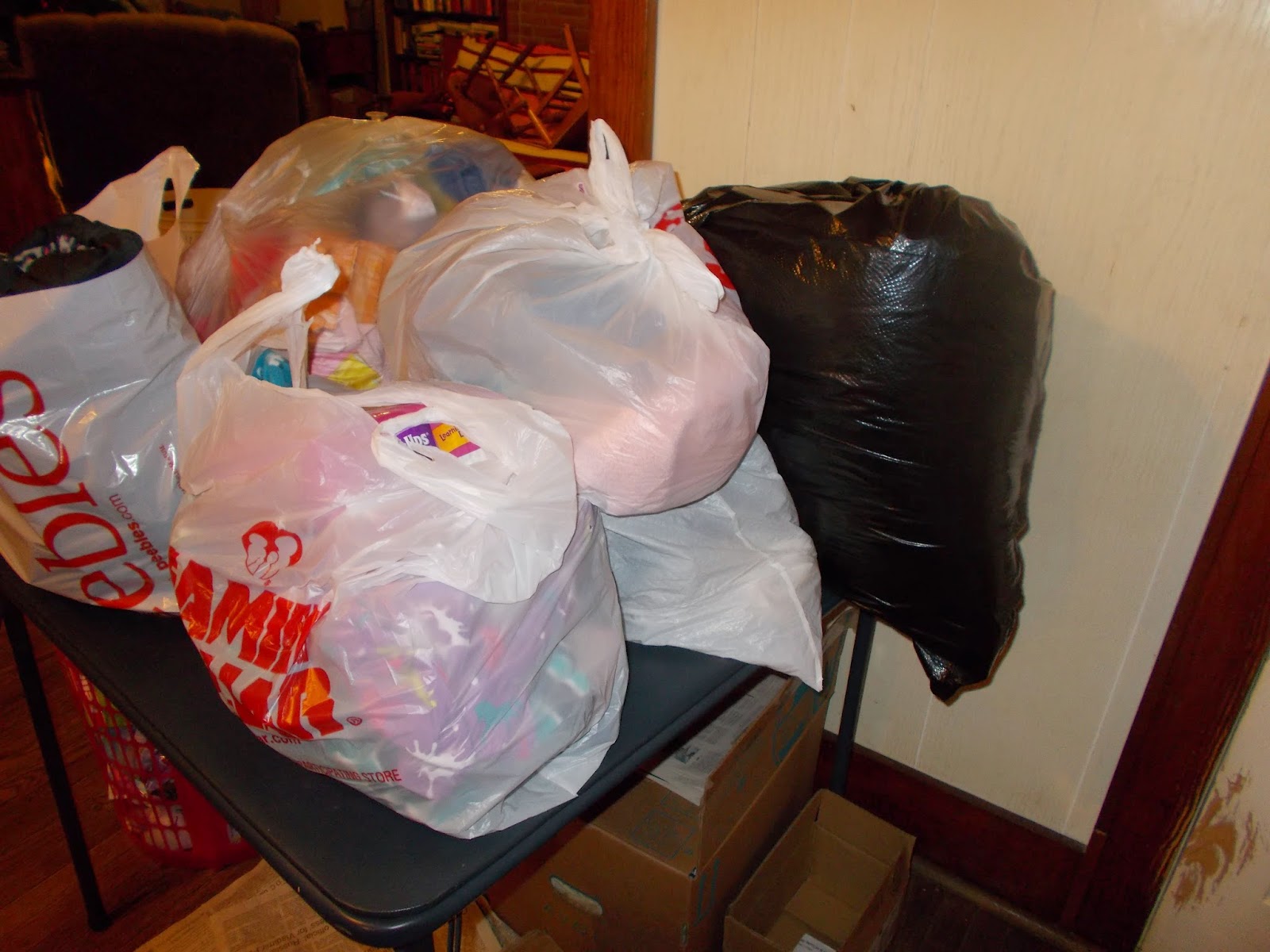 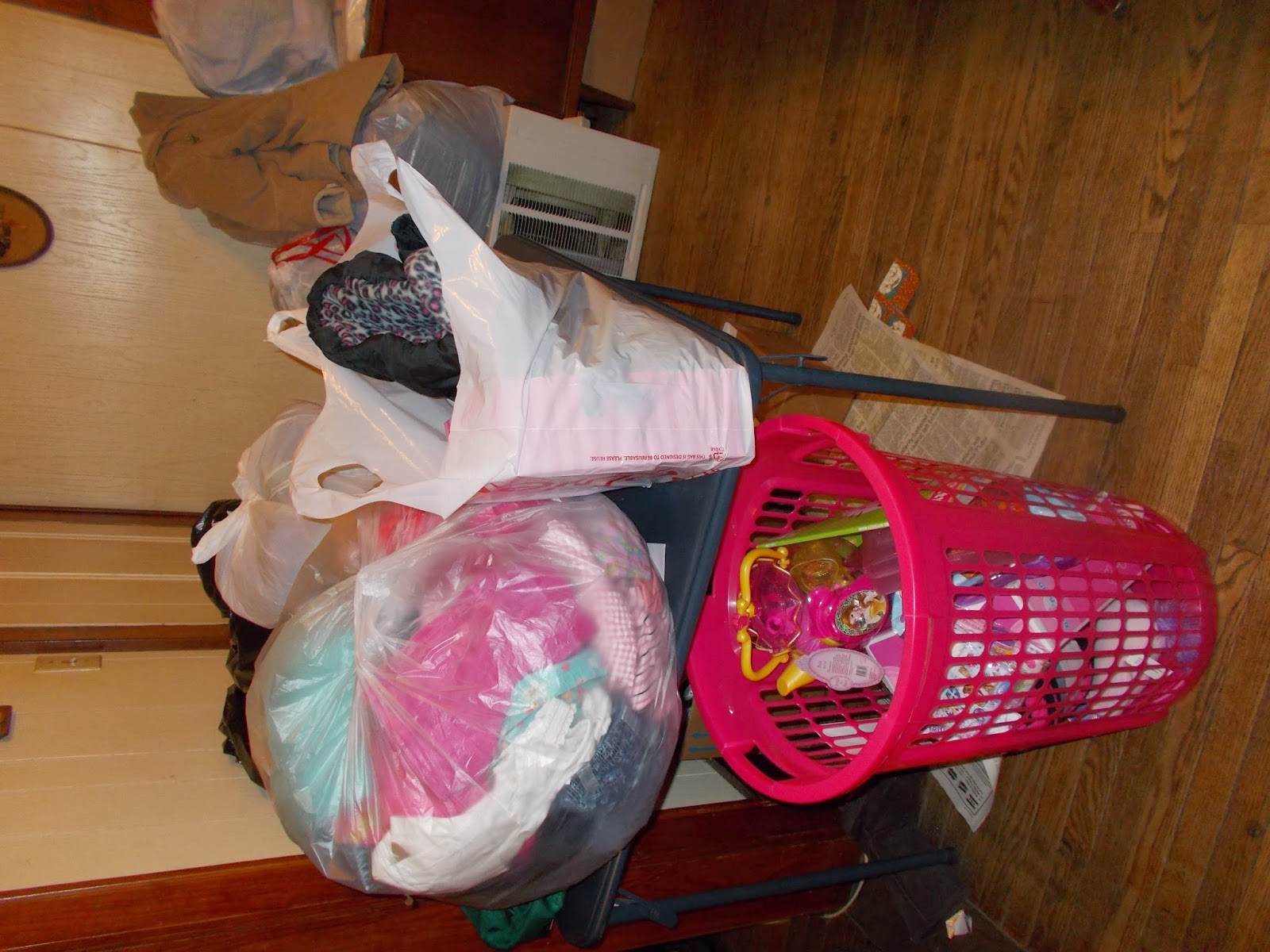 The red tall laundry basket arrived filled with all kinds of toys -used and new too -for Chantel's little girl along with two big bags of clothes for her as well!

Clate and Chantel also were offered a house near here to rent for the duration of time they may need a place -until they figure out how much insurance money they will get to use to either find another place to purchase or decide if they will have a new place built or a double-wide perhaps put on the land (2 acres) where the old house was. So that will help her little girl adjust better as for them to stay in the motel room for what may end up being a lengthy stay, it was just way too cramped for Chantel and Catrin to be there day in and day out in one small room with no where for a two-year-old to really be able to play.

The outpouring from this community as well as friends and family from afar too has, at times, really been very overwhelming for them to see how generous people really can be! People are still bringing things down to my house too and some of the things brought here really surprised me greatly too. Like today when a friend of the family showed up with a smaller bag of items along with two beautiful handmade quilts that had been done by the Women of the Forest Baptist Church about 6 miles from here. The one quilt is more just a coverlet done in blocks of a very pretty pink shade interspersed with a matching floral print and is for little Catrin's bed and the other, is a very, very heavy comforter with an inner lining that is quite think done in patches of a pale blue print and solid blue squares. One need never worry about being cold with that quilt over them, for sure!  Both quilts though absolutely gorgeous works of art!

On Friday of this past week, I kind of thought there was a possibility that Mandy and the kids might come up this weekend since the weather forecast for Friday and Saturday was relatively decent. Actually, it was almost a heat wave compared to a few days earlier this week with the temps predicted to go up into the 40s and no not-so-nice weather predicted to show up until Sunday evening.

But Friday came and went and no one showed up here. But then, around noon on Saturday I got a phone call from Mandy telling me she and the kids were on their way up then and expected to arrive here around 3 p.m. Saturday.

Since I hadn't seen them since New Year's Day, it was so nice to see all three of them again! Really, REALLY, Nice!!! And to add to that the fact that my older grandson, Alex, also showed up here Saturday afternoon and was here till about 11:30 Saturday night, really made the day complete!

The kids were so well-behaved -no squabbling at all from either of them (with the small exception being that Maya refused to eat any of the homemade beef vegetable and pasta soup I had made that day for our supper.) The reason she wouldn't even taste it was because I had put a little bit of macaroni pasta in the soup to give it a little more fill or body or whatever you care to call it! There's no accounting for her whims at mealtime sometimes!

Then today (Sunday), Mandy and the kids went up to see Uncle Clate's new abode and when they got back to the house, it was time for them to gather up their things and pack them into the car so they could get a fairly early start on their return trip home to avoid any possibility of running into any potentially nasty weather.

We said our goodbyes, hugs and kisses all around. Maya has always been pretty good with that routine but it took Kurtis a longer time to having any real displays of affection. But once he started to give hugs and kisses, it expanded greatly to now, when he comes to offer his parting he does really give great big hugs. And as he was doing that today, I told him "You really give some great hugs now, Kurtis!" His response to that was a rather quiet, subdued "I know." I followed that with my usual comments to him about how he is Gram's little sweetheart along with "I love you, Buddy" and each time he would nod his head and again say "I know!"

Just so sweet to hear him say that and to see the big, big smiles on his face then too.

And then, it was time for them to leave and I stood on the front door step, watching them pull away with both kids waving, blowing kisses and poof, they were gone.

Another visit history, ya know.

I came back inside and got a fresh cup of coffee and looked through the Sunday paper, tried to see how much of any of the three crossword puzzles in there I could fill in -not much -but just enough to make me tired.

And so, off to the computer and playing there a bit on Facebook.

As the evening wore on though, I could feel an all too familiar sense of depression seeping into me and I knew it was because as nice as this quick visit was, as much fun as I had with my daughter and my beautiful grandkids here, the void was back again and brother, I was taking a big hit of missing them then tonight!

I know they'll be up here again in about a month from now -at least that was Mandy's plan but how I wish they lived closer to me.

How I wished they still all lived here with me!

So now, it's back to the old routines I've been trying to plug into my life -doing things I usually enjoy like baking bread and also, off and on, baking a special item for a very good friend of mine who will post pictures of some kind of baked goods on my Facebook with a little subtle hint to the effect of "this sure looks good, don't you think?" which means, any possibility you will fix this and bring it to me? She knows me pretty well now as that's about the only way I do tend to bake cakes or cookies now is if I know someone wants something like that and if I can fix it for them, it makes me feel good to be doing something for someone else!

But now, I think I'll do something just for me -and go to bed!

Maybe a good nite's sleep will erase some of the longing deep inside me for my babies!
Posted by Jeni at 2:35 AM